Of course also a shiny spotlight for 2D Membranes from Switzerland. With their idea they can make a huge impact on the reduction of carbon dioxide, the key challenge of climate impact. No surprise that they won the third prize during the Global Grand Final!

Reducing CO2 in the air is the main challenge to combat climate change. Switzerland has also committed itself to the Net Zero target in 2050. 2D Membranes can play a major role in this. With their carbon capture units they capture CO2 at the source: the factories. And that’s great news for the environment.

Companies are also interested because it can save them a lot of money. European taxes on emissions are so high that they could save millions by purchasing a carbon capture unit. An important motivation to make production more sustainable.

The jury was impressed by the team and the applied technology. “I’m also very proud of that,” says Mojtaba Rezaei. “Karl and I were the representatives, but we are a huge team. ClimateLaunchpad was also a way for us to grow as a team. We sounds like techy geeks and researchers, but made the next step to being entrepreneurs.”

They have big plans for their innovation, says Karl Khalil: “I think we have the potential to have a big, big impact on climate change. Because it’s a problem at scale and we are tackling it at scale.” This is also reflected in the ambition the start-up shares in its pitch: to become the dominant carbon capture company in Switzerland. And: have a significant role in combatting global climate change utilizing their technology.

We hope to see you back in our program, as a successful alumni who inspires future participants! 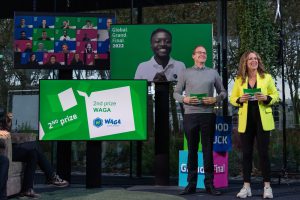 As a child Gibson Kawago had to travel 32 miles to get to a chargingstation. And that is not exceptional for 40 million Tanzanians who live in remote areas. How fantastic is his idea to transform waste laptop batteries into affordable and and environmentally friendly battery packs. The lithium-ion battery packs provide a household with... Read more » 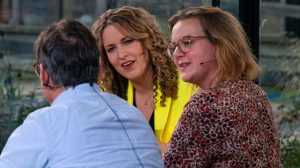 Starting a new business gives you the unique opportunity to build your own powerful and diverse team. Diversity is important. Each team member brings its own voice, background and vibe. And: it makes the market-fit for your start-up more suitable Watch The Power of Diversity in Climate Innovation Panel for interesting perspectives. With: Sara Eve... Read more »