Nima Tisdall and Christine Hebert want to change the way fish is bought and sold.

With their app Blue Lobster, the co-founders and Climate Launchpad 2019 alumni enable fishermen to cut out middlemen and sell directly to restaurants and consumers. Their digital marketplace is catching on.

“On average”, says Nima, “there are six handling stages between fish getting caught and landing on your plate. And that means we’re never eating fish less than four days old. And often the fish is a lot older than that.”

When Nima and Christine first realised there was no access to truly fresh fish in Denmark, they knew they’d found a gap in the market. Despite the easy coastal access and Denmark’s good reputation in environmental and sustainable practices, grey, overpriced, frozen packages in the supermarket dominated the market. There had to be an appetite for a producer-led market. “We went down to the harbours to try and find out what was going on,” says Nima.

Lengthy supply chain in the way of fresh fish

They started talking to fishermen, who explained the supply chain. Once they’d caught and landed the fish, they would leave it in an ice-shed until a transporter picked it up. This could be anything from five times a week to once a week. It was then transported to fish auctions, sold to wholesalers, transported again, and then maybe going through another layer of wholesalers or fishmongers before it reached consumers.

While talking to the fishermen, they also found out that many of them were struggling to survive financially. The length of the supply chain meant small-scale fishermen simply couldn’t make enough money to get by. Some needed second jobs in grocery stores or factories to make ends meet. Others left the industry altogether. In the US, Nima says that since 2008 41% of full time fishermen have left the profession.

“They were simply not being paid enough for what they were delivering,” she says. “I think it’s unusual for us in the Nordics to think about primary producers being underpaid. In consumer’s minds, it’s something that happens in far away countries. If you’ think about value chains that need to be disrupted to achieve fair pay, you’re likely to have coffee beans or chocolate in mind. But the idea that we have a similar system here locally – people don’t consider that.”

Nima and Christine set up Blue Lobster because they realised that by resolving this social issue, they would also fix the market gap issue.

Their digital platform connects restaurants and consumers directly with local low-impact fishermen. They remove the need for lengthy and expensive transport altogether.

The app cuts out the unnecessary middlemen and provides consumers with really fresh fish at a reasonable price. It also encourages sustainable fishing practic. This, for them, is a key part of the puzzle.

“The biggest problem we’re trying to solve is the trend towards unsustainable fishing,” says Nima.

“Ocean floor and marine life is being ruined by the larger bottom trawlers, who also have a tendency to overfish and under report. Our producers only work with low-impact fishing gear, so there’s no damage to the ocean floor and a lot less by-catch, the unintended fish that gets caught in the nets.”

“We think in the Nordics that we’re transparent and law abiding, but we have an issue with underreporting catches,” she says.

“With our platform, fishermen are logging their catches at sea. But typically, if they don’t have the quotas to bring in what they’ve caught, they either throw it overboard or don’t report it in the first place. This in turn contributes to a market where regulatory quotas are bought, sold and leased — a market  that is dominated by the wealthier, more unsustainable larger-scale trawlers. By paying small-scale fishermen a fair price, Blue Lobster rewards responsible logging and makes sustainable fishing an economically viable choice.”

Blue Lobster currently supplies over 60 restaurants in Copenhagen and is receiving interest internationally.

“When we started out, we were underestimated”, Nima says. “Neither of us came from a tech background and that didn’t help. There was this continuous sentiment of ‘are you girls really going to be the ones able to do this’?”

This attitude prevailed from the tech space, the innovation space and the fishing space. “We are navigating some really male dominated industries,” she laughs, admitting that the sight of her and Christine running around the harbour trying to convince fishermen to use the app must have been an unusual sight.

When times got tough, they drew on the ClimateLaunchpad community for support, and really valued being part of a network of like-minded people where you can ask for help and find inspiration. This has been especially true working with an industry that is traditionally less open to innovation.

“The industry wants to make you feel like you are a crazy green pioneer,” says Nima. “But being part of a community where you can be introduced to other green entrepreneurs who are just killing it and doing such amazing work all over the world, as well as giving you sparring partners on how to execute these ‘green dreams’ in reality… it gave us that confidence that it is possible.”

Watch Blue Lobster’s pitch video here or visit their website if you want to find out more about their business. 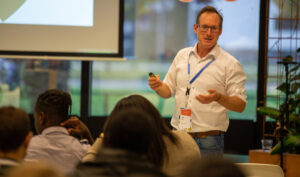 Not the biggest companies survive, but the ones most adaptable to change

How to succeed as a start-up in these digital times The pandemic has presented the global business landscape with enormous challenges. Even though of course we all crave the ‘old normal’, there is also a lot of energy and creativity in the ways we see start-ups adapt to the ‘new normal’. The pandemic is used... Read more » 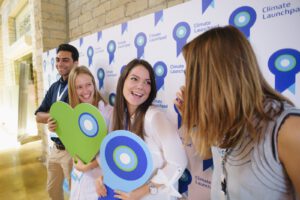