Dublin, 23-24 April 2015 – It’s amazing to see the development participants make in a ClimateLaunchpad Boot Camp in only two days. In Dublin our 9 Irish start-ups gathered at the DCU Innovation Campus. Starting without knowing anyone (which of course doesn’t count for the WasteNot-guys, the only team participating), leaving some 30 hours later with a new network and loads of feedback from their peers, trainer and coach. Like Elaine Doyle describes: ‘It was great to dream big and put a structured approach on what is just an idea.’

The ideas submitted in Ireland range from LED lamps that will lead to less energy waste as well as food with higher nutritional values to second generation bio-diesel for the agriculture industry and carbon negative soil enhancers. Next to this, the Irish should prepare themselves to living in apartments built of recycled shipping containers or make their current home more energy efficient by using an app that calculates the energy savings they can do by upgrading their house.

The app stores also better make place for apps developed to minimise food waste, to warn for disasters and to show where in their community sustainability driven ideas – like locally produced food – can be found. Last but not least energy savings in project designs will be much easier in short future by using an online tool. That is if these great ideas indeed grow into real businesses. ClimateLaunchpad will support these inspiring entrepreneurs in the next few months to make this happen.

In Ireland the competition is organised by The Green Way and Energy Cork. Aideen O’Hora, executive director at The Green Way: ‘ClimateLaunchpad is so much more than an idea competition. It’s a pre-acceleration programme that stimulates the sustainability entrepreneur to develop a strong business value proposition. It’s a great opportunity.’ Participant Gerard Meaney has learnt a lot: ‘The modules presented were very focused, useful and easy to apply.’ ‘Indeed, some very useful tools, that give clear insights’, John Sheridan agrees.

In those 2 days participants identified their target markets, adapted the prices they had in mind and sharpened their product and their pitch. For this moment the winning idea is Agri Grow Lights by Brian Reilly. What’s his next step? ‘We are waiting on electronic components from a supplier in China. When we get these, we can construct our latest prototypes and start testing them.’

However, Coaching Sessions are coming up to further perfect all the ideas and I can tell some others were very close. On June 22nd the 9 start-ups will challenge each other in the National Final. I wonder whom I’ll meet again at the European Final in September. 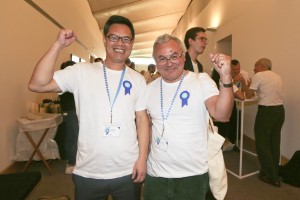 We tracked down Gareth Robert, one of the founders of Cambond. This venture came in 3rd in 2014’s European Final. A lot has happened since then, Cambond is aiming to sell their first products by the end of May 2015. We interviewed him about his winning idea and what has been going on since that... Read more » 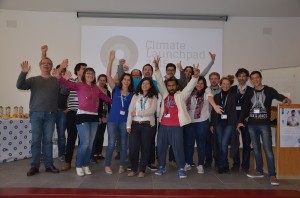 Boot Camp Portugal: getting the ideas ‘back to the basics’

Lisbon, 4-5 May 2015 – On the New University Campus of Lisbon, at UNINOVA , 7 start-ups came together for the ClimateLaunchpad Boot Camp in Portugal. Only a 10 minute drive from the beach, but with the weather being cloudy and rainy, it wasn’t hard to concentrate indoors. The main theme of UNINOVA is to... Read more »