Ljubljana, 21-22 April 2015 – The city is blooming and blazing in the first sun of the Slovenian spring. 4 teams come together to work on their business ideas. We are at the brand new Institute of Chemistry, where construction workers are still walking around fixing things and the building smells of the freshly painted bright white walls. Thus it is the perfect ambiance for building on sparkling, crispy, new business ideas in cleantechnology.

Some of the teams have already a fully developed idea and are even at the start of developing a prototype. Some of them have played around in their mind with an idea and are here to test and improve it. For ClimateLaunchpad, this first Boot Camp of this year’s edition is also exciting. We are working with the new workbooks for the first time and we hope that our preparation and hard work will pay off. And it does!

Key take aways in Slovenia were how to play with figures and data so that they correspond to reality, whilst not having been able to test them yet. Big numbers seem great, but when diving into them the burden of big numbers can prove to be demotivating. Finding out perks and prejudices about beachhead markets also proved a great lesson: when starting in the English taxi market, with only one vehicle supplier, is that an advantage or rather not?

We have learned a lot from each other, and worked hard to get every idea in kick-starting mode for the process to come. I wish all the teams the best of luck and a great process towards the national final – may the odds be in your favour! 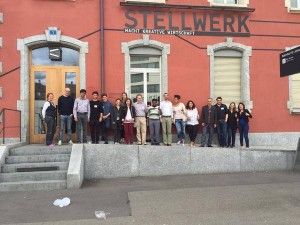 Basel, 9-10 May 2015 – The Swiss Boot Camp took place at a renovated train station and an incubator for creative industries business in Basel. A very inspiring location to work on business ideas. A total of 7 start-ups came together to work on their business ideas, and boy you must really want to become... Read more »

Boot Camp Iceland: ideas just as varied as the landscape

Reykjavik, 4-5 May 2015 – Up north, where wind, ice and fire rule over the volcanic country of Iceland, 8 teams gathered to build on their ideas for future businesses. Ranging from geothermal energy pumps to aluminium smelters and electric driving applications and a true insect protein bar – the ideas in this boot camp... Read more »