“When I started working with cleantech, the lack of women involved surprised me,” says Frans Nauta, Project Lead of ClimateLaunchpad. “We know that fixing climate change takes tens of thousands of ideas, experiments, initiatives and businesses. We need all talented and resourceful entrepreneurial potential to tackle it. Missing out on women is missing out on solving this in time.”

So why is it that across the globe only around five per cent of cleantech start-ups have female founders? As a matter of fact, the entire (clean)tech workforce is still predominantly male. In 2017 women made up 27% of the solar workforce in the US. This number also holds true for other technology jobs. These statistics get even more surprising when you look at the abundant evidence that women bring in innovation and add revenue. Research shows that companies with women in leadership positions yield a 15 per cent increase in profitability on average.

40% female founders amongst ClimateLaunchpad participants
Opposite these findings are the 40% female led teams in ClimateLaunchpad. Not only is a big percentage of all participants female, more than half the awards were won by teams with women in the lead during the 2017 and 2018 Global Grand Finals.

What is going on here?
Nauta: “We make an effort in connecting with female partners in the countries where we run ClimateLaunchpad. In over half of our 50 participating countries women are National Leads. These women not only act as role models, they also actively recruit women with cleantech ideas to join us. That really makes a difference.”

As the competition runs on a global scale Nauta is able to spot regional differences: “For example, in Eastern Europe university degrees in engineering have a history of being more gender equal than in other parts of the world. It is in this region we see even more female teams enter ClimateLaunchpad.”

The fact that ClimateLaunchpad is actually a business school in disguise also seems to appeal to women. The focus of the programme is on getting the training and skills starting entrepreneurs need to build a successful start-up.

Life after ClimateLaunchpad
We got in touch with some former female participants and asked them how they have been doing. After all, joining a business ideas competition does not automatically equal business success – or climate impact. It turns out that these female founded cleantech start-ups are growing to scale and are well underway to create climate impact:

uFraction8
With Monika Tomecka as COO uFraction8 ended up in the ClimateLaunchpad Global top-10 in 2017. They have been going strong ever since. uFraction8 provides scalable bioprocessing technology enabling biomass filtration, separation and dewatering, used with wide range of microbes like micro algae, yeast and bacteria. They sort biomass from culture medium with no harm and no flocculants unlike centrifuges, filters and membranes.

They have entered the EIT Climate-KIC Accelerator and they won the Innovation Cup at the University of Edinburgh’s annual innovation awards. They also landed the Going for Growth category award in the Edinburgh Napier University’s innovation and enterprise competition, Bright Red Sparks. Monika: “The award is fantastic and both the grant and the legal support package will help us significantly with growing our business.”

Reverse Resources
2015 Finalist Ann Runnel is creating a new business logic for the textile industry with her start-up Reverse Resources. Their software platform maps and traces textile leftovers from fabric and garment production. They connect fashion brands, suppliers, traders and recyclers into a central online data platform to build data intelligence and offer a win-win business case for all sides. Since joining ClimateLaunchpad they won several awards and grants, they joined the EIT Climate-KIC Accelerator and are running pilot projects with several (big) clients.

Green Grow by Aurora Sustainability
In 2016 Aurora Sustainability’s COO and co-founder Dr Isabella Guerrini de Claire ended in the Scottish top-3 of ClimateLaunchpad with their circular economy spin-out Green Grow. In that same year they won and were shortlisted in other national and international competitions.

After two years of successfully prototyping – with the financial support of the Scottish Government programme Unlocking Ambition – they are now scaling up the system with a modular ‘ready to grow service’ dedicated to rural communities retailers, farmers, brewery and whisky industry.

Isabella: “I think female leaders are the engine behind the Third Clean Industrial Revolution, especially when the emphasis is on agri and bio systems such food production and waste management combined with high tech, information technology, better services platforms and collaborative consumption.”

Cleantech future is female
Charlotte Waugh of the Edinburgh Centre for Carbon Innovation (one of our international partners) gives us a glimpse of cleantech future: “Many of ECCI’s rising cleantech stars are women – and it’s a trend I’m noticing across the sector. Employers know that women’s expertise and skills are a huge asset to their companies – and for many female-led start-ups, helping drive a thriving low carbon future is the ultimate motivation to make it big. I can’t wait to see some of the women entrepreneurs we are supporting through programmes like ClimateLaunchpad develop their business ideas and make their mark on the world.” 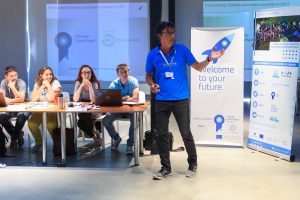 “Success as a start-up depends on how fast you are at solving problems.”

ClimateLaunchpad trainer Ron Bloemers shares the basics of cleantech start-up training. We sat down with our Boot Camp trainer of the first hour: Ron Bloemers (founder and managing partner of cleantech business accelerator Start-U-up in Amsterdam). His 25 years of hands-on experience with cleantech, renewables and start-ups is of unparalleled value to our participants. Today... Read more » 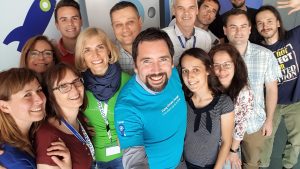 Every start-up founder needs a good reason to say no

The value of a shared founders dream An interview with Israel Griol Barres, one of our ClimateLaunchpad Trainers   Israel is the StartUPV business accelerator manager in Spain and an experienced lecturer, trainer and mentor. His specialities are innovation, business models, business strategy and entrepreneurship. He first got involved with ClimateLaunchpad in 2014 as a... Read more »