Cambond and their game-changing green glue

Cambridge based Cambond won third place in ClimateLaunchpad’s 2014 Grand Final with their formaldehyde-free glue from biomass. It is used to make wood panels like MDF or plywood, a $500 billion a year industry. Adhesives alone are a $30 billion a year business. Now Cambond is taking things even further. They developed a green equivalent for plastic by mixing discarded biomass with their toxic free glue.

No background in cleantech

“Neither of us have a background in cleantech, we didn’t have an existing network in the sustainability space. What were the key issues to think about? Things like a life cycle analysis, for instance, we had never heard of before we started ClimateLaunchpad.”

“Inventing our glue was completely unintended,” says Gareth Roberts, one of the founders. “My partner Xiaobin was working in China to help a company make coating for seeds. He thought of protein from plant extracts to create a new kind of coating, real sticky stuff. Next door from his work place was the R&D department of one of China’s largest wood panel manufacturers. Over tea Xiaobin learned they wanted to replace their formaldehyde toxic glue. That’s what got the ball rolling.”

Gareth and Xiaobin had worked together before and decided to team up again. After filing the necessary patents they started working on how to position the glue for commercial exploitation. They soon discovered they lacked knowledge and skills in this specific field.

“We now have a manufacturing plant,
are making product and scaling things up.”

That’s where joining the competition came in. It helped refine and focus the business idea. Gareth: “We could plug straight into the network. Very useful was watching other presentations. Those pitching sessions are intense. We were impressed by the size and scale of the problems participant’s attack and became aware of other technologies and approaches. It’s a very fast learning curve.

Of course, the best part was winning the national final and coming in third at the Grand Final. But even if you don’t win, having people pick at your ideas and help you work through potential problems in detail is invaluable. Joining ClimateLaunchpad is such an opportunity.“ 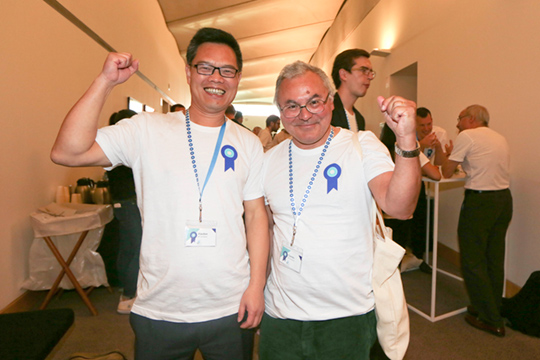 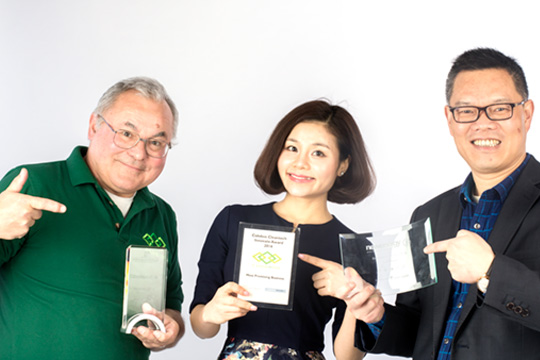 Quadruple capacity over the next two years

Winning the competition gave Cambond access to the Climate-KIC Accelerator programme where coaching and money helped their business along. They pivoted, for example, from their initial licensing model to autonomously owning a manufacturing plant. Additionally they won the first prize in the China Innovation and Entrepreneurship Business Competition.

“The hardest part of ClimateLaunchpad? Listening to other people presenting. Especially when they present well and you think to yourself: ‘Why didn’t I think of that?’”

The hard work Cambond had put in during ClimateLaunchpad and the Climate-KIC Accelerator paid off during this Chinese competition. “By then, we were able to say that we had set up a small manufacturing plant, we made product, we had tested it and it worked. It was time to scale it up.” Exactly what the Chinese jury was looking for. “We are now doing 10.000 tons a year. Rapidly pushing ahead with bringing product to market. Our aim is to quadruple the capacity over the next two years.”

“We now have set up a small manufacturing plant, made product, tested it and it works. We are scaling up. We are now doing 10.000 tons a year and rapidly pushing ahead with bringing product to market. Our aim is to quadruple the capacity over the next two years.”

Next up: green pallets and
a substitute for plastic

Cambond continuously explores new market opportunities. Such as mixing their glue with biomass waste to create a material that replaces wood and plastic products. Take straw, for example, of which millions of tons are discarded around the world. Cambond chops it up and mixes it with their glue to create substitute wood panels and even a green equivalent of plastic.

Cambond is now making pallets with this new material for which they can basically use any type of leftover fibre. “Half of all wood in the US goes into making pallets. There is about 4,5 billion pallets in the world. Our pallet has the same size, but is only two thirds of the weight of a normal wood pallet. It will hold about 5 tons, which is industry standard. What excites us most about this newly formed material is that adoption of the technology is cheap. You can use the material in existing molding machinery. That’s how we came up with a coffee cup out of coffee grounds and our glue and a bioplastic flowerpot”

Best advice: never refuse the chance to stand up and talk to people

When asked what his advice is to people starting out with their business idea, Gareth says: “Never refuse the chance to stand up to talk in front of people. Ever. You never know who is in the room and you never know who they know.”