Celebrating 5 years of ClimateLaunchpad in Ukraine — the challenges, the achievements and the start-ups

ClimateLaunchpad has been fueling the growth of Ukrainian green startups since 2016. As the national lead in Ukraine, Greencubator has organised five national selection cycles and boot camps, and held four National Finals in most creative settings – from one of the largest industrial revitalisation projects Promprylad in Ivano-Frankivsk, to an open-air off-grid solar-powered TeslaCamp. Over the last 5 years ClimateLaunchpad Ukraine has helped over 60 cleantech entrepreneurs finetune their business models and kickstart their ventures, as well as has inspired hundreds of future green entrepreneurs.

12 Ukranian finalists made it to the Global Grand Final so far. Two of them got into Top-16 and were enrolled into Climate KIC Accelerator. A number of CLP Ukraine alumni received grants from the EBRD/EU funded “Climate Innovation Vouchers” Program, led by Greencubator, some attracted venture capital or enrolled into next phase cleantech support programs.

Greencubator is confident that ClimateLaunchpad offers newly-formed green businesses in Ukraine the best methodologies for developing sustainable business models, as well as for scaling their businesses to global level.

”Despite severe challenges we face this year, and huge pressure the worldwide pandemic puts on many businesses, we are proud to see the “fighter spirit” of cleantech companies and green projects moving forward amidst chaos. This crisis proves that businesses tackling climate change are necessary for our region and the planet, as the current pandemic pales in comparison to the potential damage of climate change. These kinds of businesses recognise that climate and economic challenges are part of the same systemic issue, they aim to create new jobs that will be in demand in the future and they produce working green solutions that generate sustainable growth while tackling one of humanity’s existential threats” says Roman Zinchenko, Greencubator’s co-founder and national trainer for ClimateLaunchpad Ukraine.

In the run-up to the National Final, and to celebrate the last 5 years of ClimateLaunchpad in Ukraine, we look back at the best start-ups that developed their ideas through the programme.

One of 10 best start-ups in the #CLP17 Global Grand Final was GoTo-U, a platform connecting businesses that own charging stations and EV drivers who can charge their cars for free while using the businesses facilities (for example, shopping malls, cinemas, restaurants, hotels, and clinics.)

With the app, drivers can find and book the charging spot at the most convenient time and location. Users can get even more information about the locations around the charging station, like shops and restaurants. “You don’t see the bigger scale when trying to develop your project locally and ClimateLaunchpad opens wider horizons for everyone. When you win first prizes on the global level, you understand you have a cool idea in high demand – it gives oxygen to your faith, especially in the early stages of development”, said Lena Artemenko, co-founder and CMO.

Way before Greencubator started doing remote finals, GoTo-U won the national final with the impressive video pitch done from the tree. Yes, the team had to climb to the tree house to have a working 3G coverage for the pitch.

The ClimateLaunchpad experience, alongside Greencubator mentoring, was just the start for the team. In 2018, the GoTo-U team became the first prize winner of the Volkswagen Financial Services VWFS Startup Battlefield and was recognised as the biggest free-to-use EV charging network.

Today, the GoTo-U platform has nearly 100 business partners all across Ukraine. The platform also works in Thailand, Poland, Portugal, Great Britain, and Romania. The core team now is negotiating with potential business partners in the USA. 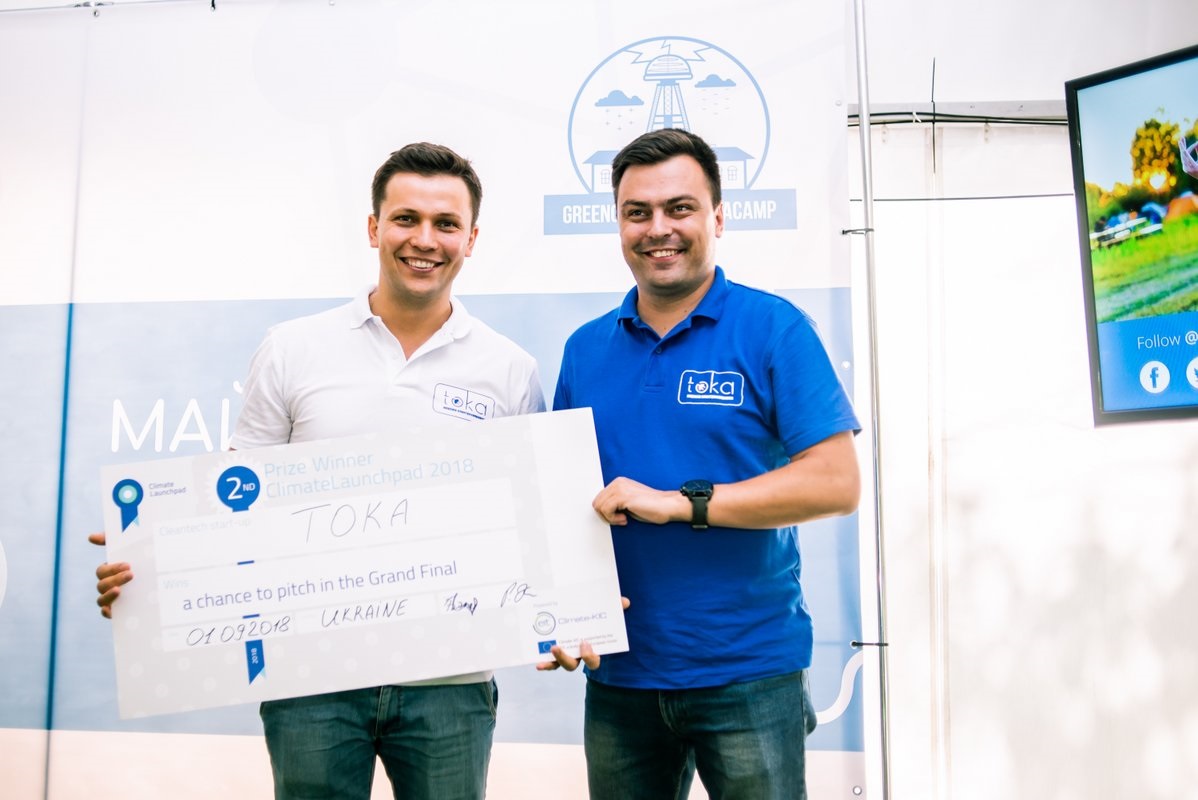 The third prize national winner in 2018 was TOKA — a network of charging stations for electric vehicles with systems for “smart” balancing energy load.

TOKA’s innovation senses whether the power in the network is divided between all the charges and dynamically redistributes it where it’s most needed.

There is also some free power in the home network at night, and this electricity is used to charge parked cars faster. It allows use of existing capacity and avoids investing in capacity increases. The team also pitched that accessible charging points will make the use of electric cars more attractive, so TOKA hopes to stimulate the transition to green personal transport.

“ClimateLaunchpad allowed us to test our hypothesis, look at a larger and broader scale at our idea and product. The best motivation is when your idea is chosen and it is put into practice. That’s why we could do it”, said Stephan Blagovisnuj, TOKA co-founder and CEO. Today the TOKA network has 13,000 clients.

GreenBin – The easy way to be green

The GreenBin team were national finalists in 2019. The app allows users to exchange used plastic bottles for new products and discounts.

The user uses the app to scan the QR-code on the packaging before bringing it to the nearest location on the map for verification, new products and discounts. The app is the perfect solution for countries where there is no deposit system for the return of bottles and replaces the reverse vending machine function.

Supermarkets only need to put out some boxes for bottles, so users don’t need to wait in a queue. They can easily scan used bottles when it’s convenient for them, even at home, and track their carbon footprint.

“ClimateLaunchpad’s most essential impact is attention to such important points as working deeply with hypotheses and in-depth research on the needs of our potential user. We also thank Greencubator who trained us how to behave during the pitch”, said Dmitro Kukharev, GreenBin CEO.

The GreenBin team has already created a working MVP for Android and IOS and there are more than 100 active users in Warsaw, Krakow, and Poznan. The GreenBin team this year also won the national PowerUp2020 Country Final Poland – the biggest competition for start-ups in Central and Eastern Europe.

The first prize national winner in 2019 was Carbominer, who came up with a new solution for obtaining CO2 from open air and directly transferring it to the client’s greenhouse without any storage.

The team’s new methods of capturing CO2, a scrubber with a low-pressure drop, allowed Carbominer to reduce the cost so much they could sell CO2 as a commercial product while contributing to CO2 extraction in the earth’s atmosphere.

Nick Oseyko, co-founder of Carbominer, said the ClimateLaunchpad experience meant the team met a range of interesting people, including contacts in target markets, and offering them useful tools for their business. “One of the features of this program is access to the CIF platform (Climate Impact Forecast) – one of best recognised climate change impact assessment instruments in the world. So we will be able to obtain detailed and certified climate impact calculations.”

The pilot launch of the first module is planned later in 2020, and based on the results of this test run, the team will take a decision on small series production. Carbominer has already raised the first pre-seed investment to develop and implement their idea and the team is also part of the EIT Climate-KIC Accelerator.

Atmosphere came third nationally in 2019. The team pitched an intellectual system that provides precise hyperlocal weather forecasts. Atmosphere’s neural network does this by gathering and analysing data from satellites, international climate patterns, a general forecast, weather history, smartphones and its own array of sensors and weather stations. The system advises users on the ways to save energy for heating and cooling, based on hyperlocal environment data thus reducing  CO2 emissions and fuel consumptions.

“The biggest advantage of the competition is that we have learned how to structure our thoughts better, describe it correctly, and present our ideas with inspiration. We’ve met like-minded people and made sure that even very sophisticated concepts can be packaged into practical products”, said Viktor Dolgopiatov, Atmosphere CEO and founder.

Presented as an energy-efficient solution for boiler rooms, the system can be used for a wide spectrum of industries: at solar and wind stations to regulate generation distribution, for weather forecasts, health protection, and for the energy efficiency of big buildings to name a few.

It is extremely important that the competition has become a long-standing tradition. This allows creating a healthy ecosystem which unites both green innovators and responsible business. And we are constantly receiving requests for localising the ClimateLaunchpad program in Ukrainian language to broaden the reach among the entrepreneurs and engineers. Ukraine needs more cleantech! After all, these start-ups are competing not only for investment, but also for solving the climate crisis and a better future for our planet. 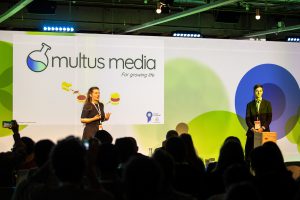 Enabling competitive prices for high quality cultivated meat Multus Media is one of our 2019 award winning participants. They didn’t lose any momentum and aim to have their first product ready by autumn 2020. What they do? They enable the cultivated meat industry to flourish by developing next generation low-cost growth media for animal cells.... Read more » 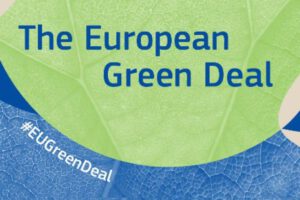 By Stella Damstra (This article was also published on CleanTechnica) The European Green Deal is a set of policy initiatives all targeted at transforming the 27-country bloc to a climate neutral economy by 2050. At the same time, wellbeing and prosperity need to be guaranteed through cleaner air and water, improved health, and a boost... Read more »