The value of a shared founders dream

An interview with Israel Griol Barres, one of our ClimateLaunchpad Trainers

Israel is the StartUPV business accelerator manager in Spain and an experienced lecturer, trainer and mentor. His specialities are innovation, business models, business strategy and entrepreneurship. He first got involved with ClimateLaunchpad in 2014 as a local coach in Spain. During that Boot Camp he decided he had to become one of our trainers. And so he did in 2015.

“Sometimes you get to see teams that were really lost at the beginning build a very successful story only in two days. That is magical.”

What are your highlights of the 2018 Boot Camps so far?
“With currently 50 locations in 45 countries I try to change the locations I go to each year. I really enjoy seeing how teams from different countries face our program. I remember in the early years I felt that in the northern Europe teams were more likely to be working on high-tech innovation ideas. In southern Europe it was more about apps, about how to decrease the food waste generation and things like that. But at the moment, my experience is that you can find high-tech ideas and apps, everything, in every country. So now we are all on the same page.

A few weeks ago, I ran the Boot Camp in Budapest. We had 10 teams, which is a perfect number and I saw some amazing ideas there. In Moldova, Spain, Norway and Slovenia it was the same. You know, in the perfect Boot Camp there are also local coaches working alongside me as a team.  What I experience during every Boot Camp is that the teams are growing, and growing, and growing over the two days. Sometimes you see a couple of teams that are a bit disappointed or concerned because they need to change a lot of things in their idea. I actually think that is the best thing that can happen in a Boot Camp. Sometimes you get to see teams that were really lost at the beginning build a very successful story only in two days. That is magical.”

Throughout the years you have seen lots of entrepreneurs in our competition. What is the story that impressed you the most?
“It is really difficult to just mention one, there are so many… I was very happy to help The Sexy Plant in 2015. They were creating this DNA altered plant in the lab, which was generating some sexual pheromones smelling like female bugs. This attracted bugs so that they wouldn’t find the female bugs and thus couldn’t reproduce. It was like a very climate friendly natural pesticide. We learned a lot of things from them. One important thing is that they had a very appealing name, so they were attractive from the beginning.”

Do they still exist today, are they successful?
“The time to market is very long and they are still in the lab, trying to get to a product they can sell on the market. So it was not a very successful story from the business perspective.

Another really nice example is YASED, participants in 2017. They have this powerful catalyst, a liquid they invented. It was pure serendipity, because they were actually trying to find something different – working on another idea. They found a product that is this liquid you can use to recycle plastic in a very fast and non-polluting way. These guys are now in the Climate-KIC Accelerator and they are very close to the market at this moment.”

What is your favourite subject to teach during the Boot Camps?
“I love the entire curriculum and the workbook we created to use during Boot Camp. People often tell me that this is the best material they have found in a program. About the modules, I can say that I particularly love the first subject, the one about the Founders Dream. It makes people think why they are doing this. What I always tell participants is that life is a roller coaster. When you’re on the right side of it, everything is going great. You don’t have any disagreements in our team, you are fulfilling your dreams. The problems come when you are in a valley of that roller coaster. You’re not so happy there, it is where you may have some problems with your team members. Or it is where you are struggling to make ends meet with your start-up and you receive a fantastic job offer for 60.000 Euros per year for example. That is when you need to have a good reason to say no. So I really like that module, because it helps you to find that reason. The reason to keep fighting for this dream. But it also connects your personal dreams with the start-up that you need to build. It is not the start-up that will make you achieve something, but your personal dreams are. Your start-up is the means to that end.”

“When you are struggling to make ends meet with your start-up and you receive a fantastic job offer. That is when you need to have a good reason to say no.”

How do participants relate to this chapter?
“I think that it is a bit confusing in the beginning, because they expect to talk about their business idea. But this first module is not at all about their idea that, it is about their personal dreams. They can be a bit confused or stunned at the beginning when they are not even allowed to talk to the other team members, in the first exercises of this module. There they realize: „So this is about me, not about my start-up” and I think this is something they really like, because it is unexpected. I was with a start-up yesterday and they told me that the guy who developed all their software, was now hired by a big corporation, and now maybe the company is going to break and they are not going to be able to continue. So it is very important to have a common dream with all the team members.

Regarding the other modules, also some of the important ones I think are The Customer Segmentation and The Customer Value Proposition. Customers don’t buy a ‘what’ but they buy a ‘why’, so they need a reason why they will pick you instead of the other ones. These modules make you think about that.”

What do you tell people at the end of the Boot Camp? What is your main message before they go to the next phase of the competition?
“The last thing that I usually say is that although this is a competition, winning the competition is not the most important thing. There is one guy here in Valencia who now is millionaire and now he has created an eco-city here and he always said he didn’t win any competitions; he participated in some, but he never won. And this is because maybe at that time the potential couldn’t be seen. So it is not important to win the competition but what I try to emphasize more to the teams is that the network that they generate during ClimateLaunchpad is going to be very important for them, not only during but also after the program.”

What are the key trends that you see among participants?
“All the countries are now trying to replace plastic, which is great. That is a huge challenge for all of us, to obtain new materials that can do better than plastic. Also I see they are trying to generate power from everywhere, which is amazing. If we can find a new source of power or can improve the efficiency of what already exists, that’s something really important as well. And I think that also to find ways to store new energies will be something very important; batteries are very polluting and finding new materials is also something that you can see in the teams as well.” 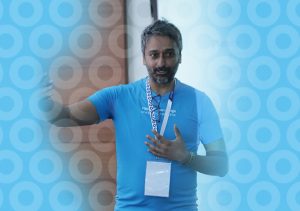 ClimateLaunchpad India is running in 4 states and looking to expand. An interview with Pratap Raju, the guy behind this success. 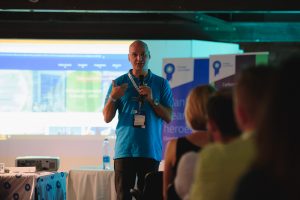 You create the biggest impact if you create the largest business. An interview with Hans Westerhof, ClimateLaunchpad Trainer and Project Lead. Hans Westerhof has been part of ClimateLaunchpad ever since the early days back in 2014. As Project Lead and as one of our Trainers. We interviewed him on his preferred module in our infamous... Read more »