The first 15 CleanLaunchpad participants have wrapped up a two-day (June 16, 17) Boot Camp in the Netherlands to prepare them for the European final in October.

Out of 78 business ideas submitted in the Netherlands*, the 15 best ideas were brought in for the first Boot Camp near Utrecht, on 16 and 17 June. It will be followed by Hungary and by nine other European countries this summer. Participants compete for three € 95.000 places in the Climate-KIC Accelerator, the world’s largest climate-specific start-up accelerator.

Some of the promising ideas featured at the Boot Camp in the Netherlands include a concept of hydroalgae power is to provide a sustainable source of energy and water by desalinating seawater with the help of saline photosynthetic organisms and solar energy. And, the idea of sustainable pig production through adaptive breeding and a matchmaking platform between aquaculture and agriculture for their waste products. You’ll find more ideas at Facebook.

The Boot Camp was led by a Climate-KIC team of international business coaches. Participants were immersed in a multi-disciplinary environment of climate innovation and entrepreneurship. They were put in touch with like-minded people who, by joining forces and combining different disciplines, sharpened their business ideas and worked on their pitch.

Participant Lodewijk Stuyt comments: “It has been an intensive two-day experience. But what I liked best was the inspiration I got from the other cleantech ideas and the peer-to-peer feedback.”

“The coaches were very patient, what was very positive.” – Participant Rachel Wayoike

Frans Nauta, Deputy Director Entrepreneurship, Climate-KIC, comments: “It’s great to see these participants of CleanLaunchpad form a new generation of start-ups with the skills to bring innovations to mitigate and adapt to climate. We also help them connect. First to each other and then to the rest of the world, as this is an unstoppable cleantech movement.”

After attending the CleanLaunchpad Boot Camp, these participants will pitch their business plans for the national jury in the Netherlands (25 September). The big European final of CleanLaunchpad will take place on 29 October in Valencia, Spain. Per country, three cleantech pitches will be judged based on impact on climate change, potential of new jobs and economic growth and the motivation of the contestants.

* CleanLaunchpad NL had teamed up with the Climate Adaptation Business Challenge, organized by Knowledge for Climate and Climate-KIC. 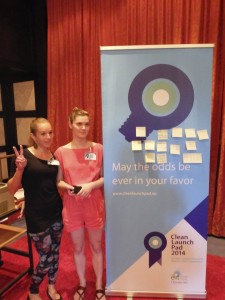 We've made a video blog from the CleanLaunchpad boot camp in Hungary to give you an impression of the hard working and fun we've had.