The EU’s flagship environmental policy combined with its COVID-19 green stimulus could be a boon for start-ups who are quick off the mark.

By Catherine Early
(This article originally featured in our event magazine the CLP Daily #4.)

The European Commission needs entrepreneurs – their ideas and their inspiration. One of the commission’s most senior figures used his talk to the ClimateLaunchpad 2020 audience of start- ups to urge them to come forward with ideas.

“We want to get this money into innovation and onto the ground as soon as possible,” said Diederik Samsom, Head of Cabinet for the Commission’s First Vice-President Frans Timmermans, made this clear to ClimateLaunchpad’s audience.

The money Samsom was referring to will come from the 750 billion euro COVID-19 recovery fund launched in the summer, of which nearly a third of which is to be targeted at action on climate. Innovation was needed in particular for energy efficiency building retrofits, such as building-integrated solar panels, as well as better and cheaper insulation materials.

Outside cities, smart precision farming needed technology, he said. Social innovation, to encourage people to make changes to make their lives more sustainable, would also be required, he added.

The Commission’s stated aim of the European Green Deal was that it would transform the EU into a modern, resource-efficient and competitive economy, with no net emissions of greenhouse gases by 2050. Economic growth would be decoupled from resource use, and no person or place would be left behind, it said.

It was different to previous policies, Samsom said. “For once, politicians didn’t just go for what was feasible, or what it could get agreement on, but what was needed to deal with the urgency of the problem.”

The Green Deal was launched in December 2019, but just months later, the COVID-19 pandemic devastated economies as lockdowns were imposed across the bloc. Samsom admitted he had worried at first that the pandemic would derail climate action, but said that instead it had catalysed it.

“You have our commitment that we will stay the course, and that sustainability ambitions will not be wiped off the table this time,” he said.

Money has already started flowing to innovation. In July, the commission announced that 307 million euro had been awarded to 64 start-ups and SMEs who were working on solutions that fitted in with the bloc’s Green Deal and Recovery Plan.
Winning proposals range from innovative solutions for the automotive, aerospace and maritime sectors to advanced materi- als or Internet of Things technologies, the commission said.

It is also making available 1 billion euro under the Green Deal Call – the last and biggest funding round under the EU’s Horizon 2020 innovation programme. The call is designed to respond to the climate crisis, provide more protection to Europe’s biodiversity and habitats under threat, and accelerate a sustainable recovery.

Samsom’s call to action was echoed by Virginijus Sinkevičius, the European Commissioner for Environment, Oceans and Fisheries, in a special recorded message to ClimateLaunchpad. In particular he said, innovators should look to be systemic in the design of products so that a solution to one problem did not cause another.

They should think of the product’s entire lifecycle and aim for a circular model, and consider the embedded carbon in raw materials and manufacturing, he added. “Around 80% of emissions from smart phones come from their production. Real innovation does not work like that – it needs to consider sustainability from the beginning to the end,” he said.

Michael Liebreich, founder of news and data site Bloomberg New Energy Finance, also believes that the European Green Deal is a good opportunity for start-ups. “It’s a lot of money that needs to be spent quite quickly – anyone with shovel-ready projects in energy efficiency, or batteries in the home, anything you can do that can get people back to work very quickly, can play very favourably within COVID-19 recovery plans,” he tells ClimateLaunchpad Daily. 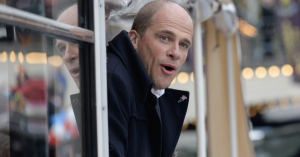 Man with a green mission. An interview with Diederik Samsom.

By Catherine Early. (This article originally featured in our event magazine the CLP Daily #2. Diederik Samsom was one of the speakers during our Global Grand Final 2020) Start-ups provide an important source of inspiration to politicians looking for new policy ideas, says Diederik Samsom. With a senior role in the European Commission as head of... Read more »