(a bit of wine, a bit of sea and state your DEAL!)

Glyfada, June 13-14 2015 – There’s a Greek Eurovision song from the 70’s called “ligo krasi, ligo thalassa ke to agori mou” (“a bit of wine, a bit of sea and my boyfriend”). Paraphrasing the song to the title of this blog, one can get the essence of the Greek national Boot Camp that took place on the weekend 12th-14th of June in coastal Glyfada in the outskirts of Athens, Greece.

After a very difficult selection of high quality applications, the 10 start-ups that were selected said no to the beach on the first sunny weekend and joined us for an intensive and fun Boot Camp! In our usual Chrysalis LEAP style, it’s all about working hard and playing hard, but a bit about the event later on, first let me introduce you to the team.

The boot camp was led by Paris Thomas, Chrysalis LEAP Co-founder and Climate-KIC trainer who recently got “shirt-ified” at the ClimateLaunchpad “Train the Trainers” event. The rest of the Leapsters, Eloiza, Andreas, Deano Alex and the two Stelios worked hands on with startups to help them develop and express their business idea and communicated the Boot Camp and programme to the world through interviews on national radio and social media. Of course this would not have been possible without Phani, our project coordinator who ran the backstage, making sure everything worked smoothly and perfectly throughout the weekend! Last but not least, Robert Langer, a longtime friend and associate of Chrysalis LEAP from Germany, brought with him years of experience working with green start-ups across Europe.

The Boot Camp kicked off with a ‘meet and greet’ dinner in a social and friendly setting at the Sea View hotel in Glyfada where all teams had the chance to mingle with each other and their coaches before their 8:00am morning call. Vassilis and Natasa of Necova, a 2014 graduate start-up of Chrysalis LEAP and now in the Climate-KIC accelerator, joined us for the evening and inspired the teams with their story and successes to-date. After a few glasses of wine (and a bit more of that for others), it was time to get some rest.

After a healthy breakfast, the teams were awake, eager and ready to begin what soon proved to be a hardcore weekend. We were all in the room when Alex shouted ‘Goodmoooorning(!!!)’ generating energy and excitement. Following a brief intro of Chrysalis LEAP and ClimateLaunchpad, he handed the floor over to Paris who engaged the participants instantaneously. Whilst Europe’s Heads of States were deliberating the ‘Grexit’, these 10 teams were deliberating their founder’s dream, working on their deal, considering and determining their beachhead markets and their customer value propositions. People in lime green T-shirts constantly circled the room, going from team to team helping, coaching and mentoring them every step of the way.

After Day 1 had come to an end, it was time for a well-deserved dinner. And what better than an authentic Greek fish meze in the heart of Glyfada?! Everyone had the chance to relax, enjoy the good food and the early summer breeze.

On the morning of Day 2, the teams were asked how they felt. Some were scared and stressed, and others felt more confident and excited. A range of feelings, all of which are normal in the life of the entrepreneur. It’s a steep learning curve – no one can blame them! Day 2 begun with a short recap of the previous day – the teams were asked to present their deals and beachhead markets before getting all nitty-gritty with the financials and competitive advantage. Paris had finished all modules before lunch and invited Dimitris Mertzis from BIO2CHP, another Chrysalis LEAP graduate in the Climate-KIC accelerator to give his presentation. Dimitris spoke about his team’s journey and experience with the programme generating a lot of questions that he gladly addressed over a lovely meal served at the hotel.

It was then time for some tough love. 10 teams pitched their ideas before the jury comprising of two Chrysalis LEAP members and our coaching expert Robert Langer. One could most definitely see the tremendous difference and improvement these teams had made over the course of the two days but make no mistake; there is still a lot of work to be done.

See you all at the coaching sessions with a bit more wine, sea, and stating your deal!

DroneX is offering aerial monitoring to agriculture to improve efficiency in the sector.

ClimateIS offers information and analysis on climate extreme forecasts to the insurance sector!

Recyworks is a “closing the loop” growing organic mushrooms in urban micro-farms by utilizing waste coffee grounds from coffee shops and also selling fertilizer for greenhouses.

Lighthouse Solar Systems uses thermal energy from the sun to provide hot water to hotels, with a short payback period and savings in energy consumption.

SARM has developed a new, more efficient combustion engine for the marine and shipping industry.

CosyApp provide a combo of software and hardware for domestic energy monitoring. 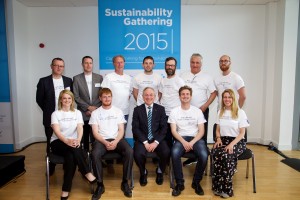 Dublin, 23rd of June 2015 – The “A Green Space to Innovate” event kick started the “Sustainability Gathering 2015” and took place on Monday afternoon, the 22nd of June, 2015 at the CHQ Building, Custom House Quay, Dublin.   The event showcased innovative cleantech entrepreneurs, and hosted the national final of the ClimateLaunchpad competition.The ClimateLaunchpad... Read more » 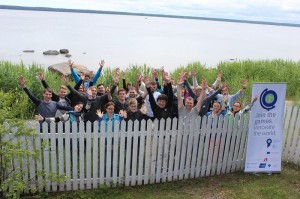 Estonian deals were sealed in the sauna

June 26-28 2015 – The ClimateLaunchpad Boot Camp in Estonia kicked off with a meet and greet dinner on June 26th, at the small sailors’ village Käsmu by the Baltic Sea. At that inspirational spot all teams had an opportunity to introduce their innovative ideas by using modeling clay. That way the 10 selected teams... Read more »