By Catherine Early.
(This article originally featured in our event magazine the CLP Daily #2. Diederik Samsom was one of the speakers during our Global Grand Final 2020)

Start-ups provide an important source of inspiration to politicians looking for new policy ideas, says Diederik Samsom. With a senior role in the European Commission as head of cabinet for first vice-president Frans Timmermans, Diederik Samsom has recently witnessed first- hand the ramping up of the EU 2030 carbon emissions reduction target from 40% to 55% compared with 1990, and the launch of the bloc’s green deal, which is targeting a 750 billion euro investment, nearly a third of which is to be targeted at action on climate.

“I predict that the third decade of the century will be incredible.”

But his interest in clean technology began many years ago as a teenager during the 1980s. He recalls the explosion of the nuclear reactor at Chernobyl in the Ukraine, the sinking of Greenpeace’s anti-whaling ship the Rainbow Warrior by the French navy, and his reading of “Children of Mother Earth”, a Dutch children’s book depicting a post-apocalyptic earth.

“That’s three events in life that are pretty impressive for an adolescent, so that changed my life and my mission,” he says.

A stint as a Greenpeace campaigner was followed by becoming Chief Executive of a green energy trading company Echte Energie (Real Energy). This was a start-up in essence, though its main innovation was in marketing rather than technology, he explains.

The company sold green energy, which was “a crazy concept” back in 2002, when Dutch energy markets were liberalised only for green electricity, he says. The company has merged and evolved over the years, but still exists, he says.

Samsom also spent two years working for a private venture capital firm, travelling round Europe to find clean technology ideas with investment potential. He noted that though there was more money for this in Western Europe, in the East he found “garages and sheds where five young people, chemists, physicists, or a combination of skills, working on the most crazy ideas,” he says.

Despite his call to politics in 2003, when he was elected to the Dutch House of Representatives, Samsom retained a keen interest in environmental issues, acting as the Labour party’s spokesperson on sustainability, climate change and energy, and traffic congestion.

Though there was a lot of development of new technologies during the first decade of the century, they did not lead to much change – solar PV and wind energy was very expensive, and electric vehicles were “going nowhere”, Samsom says.

But the pace of change in the second decade has been completely different, with these technologies now mainstream. “There’s so much out there that’s possible that wasn’t ten years ago because of the cost curves,” he says.

“I predict that the third decade of the century will be incredible. You see all the innovation now bending the curve, and all of a sudden change is going to happen very fast,” he says.

“Inspiration is actually the most important ingredient for making new policies.”

Politicians are barely keeping up, he says. While he admits that the European Commission has not focused enough on the start-up sector, he says that entrepreneurs provide a crucial value for politicians: inspiration.

“Inspiration is actually the most important ingredient for making new policies.”

“It might sound strange, but inspiration is actually the most important ingredient for making new policies, and start-ups are a source of that,” he says. “I’m really inspired when I see young entrepreneurs working on something that’s incredible, crazy, outrageous and still continuing to do it.” 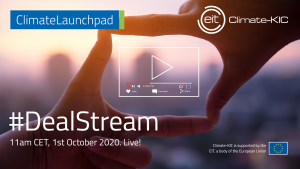 As you know, we keep track of all of our alumni and their milestones in the areas of revenue, number of FTE, funding, climate & social impact. Each year we award the best performing start-ups with the infamous Impact Award. This year’s best performers were: Burgs Foods Bandora Systems mango solar Mighty Meat Ponera Group... Read more »

“There is such a sense of energy at ClimateLaunchpad.” – Kirsten Dunlop, CEO of EIT Climate-KIC Across the globe we all had to translate all of our enthusiasm, hopes and spirits to the perimeters of Zoom screens this year. For our competition it meant we had to rely on internet connections, computer cameras, microphones and... Read more »