• 82 cleantech start-ups shortlisted from a list of more than 700 across Europe are set to compete for funding and the chance to enter the Climate-KIC accelerator
• ClimateLaunchpad, Europe’s largest business ideas competition, creates the stage to unlock Europe’s cleantech potential and accelerate innovations that address climate change
• Start-ups from 28 European countries will on Friday 4th September pitch their business plans to a renowned international jury

Amsterdam, August 28, 2015 – All across Europe, a new generation of entrepreneurs is hard at work creating adaptation and mitigation solutions to climate change. More than 700 of these entrepreneurs entered this year’s ClimateLaunchpad scheme – Europe’s largest cleantech business idea competition – which is due to come to a close on Friday 4th September with 82 cleantech start-ups from 28 different countries competing.

This year, over 700 start-ups from 28 countries submitted their initial business ideas. Each country then selected the most promising innovations for the ClimateLaunchpad competition. Since spring, the selected participants have gone through a demanding programme to work on their business idea: a 2-day boot camp, intensive business coaching and competing in national finals. Next week, 82 cleantech start-ups from 28 European countries will pitch their business plans to a renowned international jury. The jury will judge these finalists on criteria including feasibility, scalability, job creation, climate impact and quality of their pitch. ClimateLaunchpad selects the ten best teams to join Climate-KIC’s prestigious Accelerator Programme. The top three ClimateLaunchpad winners receive cash prizes.

Meet Europe’s Next Generation Cleantech Entrepreneurs.
More detailed information on the finalists from across the energy, water, transportation and urban development space can be found here. You are warmly invited to the European Final to meet this new generation of Cleantech Entrepreneurs, investors, and the local, national and European communities of stakeholders actively working to mitigate climate change.

About Climate-KIC
Climate-KIC is one of the Knowledge and Innovation Communities (KICs) established in 2010 by the European Institute of Innovation and Technology (EIT), the EU body with the task of creating sustainable economic growth in Europe, where the global challenges of this time to be tackled.

Results Climate-KIC
Climate-KIC has booked impressive results since 2010. It participated in giving birth to over 400 new cleantech start-ups. These efforts have been producing an incredible multiplier effect. The start-ups raised over € 100 million in external funding and have strong records as job creators.

About the European Institute of Innovation and Technology (EIT)
The EIT is an independent body of the European Union set up in 2008 to spur innovation and entrepreneurship across Europe to overcome some of its greatest challenges. It brings together leading higher education institutions, research labs and companies to form dynamic cross-border partnerships – Knowledge and Innovation Communities, KICs – that develop innovative products and services, start new companies, and train a new generation of entrepreneurs. 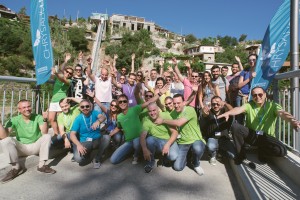 27th July 2015 –  @ the Hellenic Bank Head Office in Nicosia, 3 teams were selected to represent Cyprus in Amsterdam at the European Final. Before we reveal what happened at the finals, lets rewind and see what happened throughout the ClimateLaunchpad journey in Cyprus. Determination to learn, evolve, teach and guide formed the key... Read more »