When you see loads of start-ups you start to discover patterns. I’ve probably seen over a thousand start-ups by now, most of them in cleantech. One of the patterns emerging is Founder Narcissism, which is especially prevalent when a start-up is working on an idea that feels like it will dramatically change the world for the better. Combine that with a technology that looks like something from science fiction and you get a phenomenon I like to call ‘Saving the Planet Star Wars Style’.

I run into those a lot through my work with ClimateLaunchpad, Cyclotron Road and UC Berkeley. Like a start-up solving a HUGE waste problem in an amazing new way. Or a technology that potentially doubles the efficiency of solar panels by using some unpronounceable nano-tech or a new perovskite (what?) material. Battery technology that will double the range of electric cars, who wouldn’t want that? Getting electricity form grass (really!). I’m not claiming I’ve seen it all, but I’ve certainly seen a lot.

Imagine the first time you run into something like that. It really does feel like Saving the Planet Star Wars Style. I clearly remember it and was blown away by the potential. You think ‘Really, is this possible?’ For a moment you forget how hard it is to bring new breakthrough technologies to the market. You forget that you don’t know this team yet, and don’t know if they have the skills or the mindset to pull it off. All you want is to root for this idea and think with all of your heart: ‘I want this to succeed. And I will help them do it! (It will make my program/project/grant program/incubator/accelerator look great!) Yay!’

The idea is the single most overrated element of a startup

My response that first time was: ‘Wow, this is amazing, it’s like magic. This will be so big. Huge!’ And I made the mistake of saying that while the founders were still in the room. They were trying to get into the Climate-KIC Accelerator program, and they just heard me say that they were almost certainly ‘in’. The problem with my response is that it didn’t prepare the founders for the work involved with getting from idea to successful business. I reinforced the misconception among so many founders that having a brilliant idea is all it takes. This has been proven wrong over and over again.

Let me state this very clear: the idea is the single most overrated element of a start-up. The best ideas don’t win. What wins is the best execution. When a venture capital friend of mine was asked in a panel what the three key criteria were for investing she said: ‘Team, team, team’. And she was spot on. If you give an amazing idea to a mediocre team the start-up will fail, or turn into some zombie thing without any impact. If you give a mediocre idea to an amazing team, they will turn it into something great.

What makes turning a brilliant idea into a successful start-up particularly hard is that it’s so difficult to stay focused, because there are so many distractions. I’ve frequently seen it lead to Founder Narcissism. Here is the playbook.

What happened with the start-up in the years after that initial meeting is a process that I’ve seen repeating itself many times since. It goes something like this. Everyone and their mother give extremely positive feedback to the founder team. Because, let’s face it, we all love Saving the Planet Star Wars Style. It’s cool. Founders start feeling pretty damned good about themselves; they are this era’s new heroes. They will get accepted in a great start-up support program, like the Climate-KIC Accelerator, Cyclotron Road or Powerhouse.

Next is that they start applying for start-up competitions. Which they will win. Not because of their chances of commercial success, but because the judges also root for Saving the Planet Star Wars Style Start-ups. You can’t really blame the judges for that: in the early stages of a business it’s super hard to assess whether the execution of a Saving the Planet Star Wars Start-up is at all possible, and whether the team has any chance of making it. There is no way of making that assessment based on a 5-minute pitch and 5-minute Q&A, right?

Winning the first start-up competition creates its own dynamic. The founders get invitations to join other start-up competitions. They get invitations to give talks for a host of organizations: start-up incubators and accelerators, corporate events, political parties. They will be invited by government agencies to brainstorm with other start-ups on how to remove barriers in regulations, so that even more amazing Saving the Planet Star Wars Style Start-ups have a bigger chance of succeeding. Other agencies may reach out to the team and ask them to apply for a certain government grant program. Etc.

In a 2010 Forbes article, Bo Fishback (vice president at the Kauffman Foundation, a nonprofit that studies entrepreneurship) already says: “Entrepreneurs hit four or five of the biggest contests and get seed money from all of them.”

Winning the first start-up competition comes with a money prize. That’s perfect, because it’s free money. That’s why the founders will go after more of this ‘free’ money. They become professional prize and award seekers, and as a result, they become really good at it. They learn how to adjust their pitch to the specific audience, creating a nice ‘feel good’ atmosphere of optimism and adventure. All for the good of the planet, of course.

It’s quite possible to make over 200 k€ or k$ in funding per year from these start-up awards and competitions. You can do this for a year or two, sometimes even three. You’ll be surprised how many start-up competitions are out there, in cities, provinces, states and countries. Not to mention the global awards from the UN, the Worldbank to foundations and corporations.

At a certain point – sometimes sooner, sometimes later – a forward-looking journalist will pick up on the promise of the Saving the Planet Star Wars Style Start-up. This journalist will go for the narrative style interview, because people LOVE to read about brilliant founder(s) that against all odds is/are Saving the Planet Star Wars Style. This can easily escalate into a full-blown media hype. I’ve seen teams go from regional coverage to TV performances on BBC World, ABC News and CNN in less than six months.

Imagine this was your start-up. What an adventure, right? What a success! So much recognition! Wouldn’t that be amazing?

Well, actually, no it isn’t. The problem with this ‘awards and media’ cycle is that the founder’s egos often have a hard time dealing with all the positive attention. Based on the incredible amount of positive feedback they truly start to believe that they have unique qualities. Which is not at all strange, especially since most founders are quite young. They develop narcissistic traits (definition of narcissism: with a grandiose view of one’s own talents and a craving for admiration). They crave for the positive attention, and have a hard time getting feedback that is not in line with their bloated self-image. Teachers and trainers like me have a word for that: they become ‘un-coachable’.

You may have noticed something else. There is something missing in this story so far. Something that is kind of useful for start-ups: the customer. ‘The single necessary and sufficient condition for a business is a paying customer’. I can’t repeat Bill Aulet’s quote enough. If you are a founder and spend a lot of your time pitching at competitions and winning awards, brainstorming with government people, giving inspirational talks at corporate events, applying for government grants, talking to the media, crafting press releases, generating and feeding the buzz, you are taking time away from the most important thing you should be doing. And that is: talking to potential customers.

So, you see, there is no free money and there is no free media. Putting your time and effort in winning start-up awards and talking to the media comes at a steep price. You have much less time for what is the real work: figuring out a market segment where customers have a real headache.

I’m not saying you should never join a competition. What I’m saying is you should only do it if it’s the best use of your time. Joining a competition keeps you from doing something else. That’s called opportunity costs. I’m not saying you shouldn’t talk to the media either. But only do it if you have a good reason for it. Again, think opportunity costs. By the way, there is only one good reason to talk to the media: getting in touch with potential customers. Never talk to the mass media, focus on expert media that are actually read and/or viewed by your customers in your beachhead market.

What can you do to prevent yourself from developing Founder Narcissism traits? Surround yourself with great advisors that you trust, and ask them to be alert on early symptoms. One of my favorite start-up founders once asked me if I had a checklist with symptoms of a failing Saving the Planet Star Wars Style Start-up. She had a LOT of media attention and I had warned her for that. It was improvised, but here are a few in the screenshot below. I’m sure there are many more symptoms. 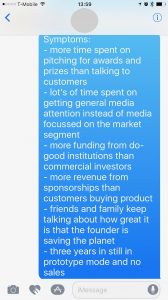 ‘Hey Frans’, you may think by now, ‘you seem awfully skeptical of start-up competitions, especially given that you are the founder of ClimateLaunchpad. Which you proudly claim to be the world’s largest green business ideas competition…’

And yes, you would be right about that. But – of course – we’ve thought about this. It’s why we focus on very early stage business ideas. If a start-up is incorporated for more than a year they can’t join. Another thing we do differently at ClimateLaunchpad is that there is a lot of training involved that is not about what do on stage (the pitching) but focused on customer discovery. We present ClimateLaunchpad to partners as the ‘Green Business Ideas Accelerator camouflaged as an international competition’. Thirdly, there is no prize money involved at national level, and a relatively small first prize (10 k€) at global level. That’s how we keep the professional award seekers out. And that’s how 85% of our 2015 alumni are still in business today.

Do you know any other symptoms of the Saving the Planet Star Wars Style Start-up that is failing? Let me know.

An update on 2014 finalist Desolenator: affordable clean water for a billion people by 2035.

Using nothing but sunlight, Desolenator turns polluted or salty water into enough drinking water for a small family. Water heats up on the solar panel until it's boiling. Salt and heavy metals like arsenic are filtered out, the result is clean drinking water. We thought it was high time to catch up with what they’ve been up to recently. 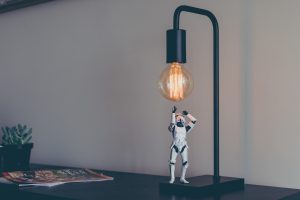 Over the years I must have seen more than a thousand start-ups, most of them in cleantech. One of the patterns I discovered is a phenomenon I call ‘Saving the Planet Star Wars Style’. It sounds cool, but can in fact mean the beginning of the end for many promising entrepreneurs. Let me explain. Great news:... Read more »