Once you join ClimateLaunchpad, of course you want to win. That’s how it works for me too if I join a competition. But you know what? Winning is overrated. The biggest benefits of joining ClimateLaunchpad are not about winning. At all. The real prize is that you get to build your business and find a customer that’s willing to pay for your product. ClimateLaunchpad helps you do just that. Fast, efficient and in a very fun way.

Let me explain why I think winning is overrated. Each year during our Grand Final I give this talk about the way Google started out.Larry Page and Sergey Brin came up with their idea at Stanford university; they called it PageRank – an algorithm to measure the importance of website pages.

At the time there were about seven successful, well-funded search engines like Alta Vista, Excite and Yahoo. These companies were delivering search results through people cataloguing the internet. It wasn’t really automated; they were like internet-librarians, indexing the internet on a daily basis.

At the same time the web was growing exponentially. To keep up with that growth the number of people indexing it also had to grow exponentially. This of course didn’t make sense to Larry and Sergey, and that’s how they came up with PageRank. The idea was to automate the process of indexing relevant links and other content so search results would be better and faster. Looking back, this of course makes perfect sense. We can now all agree that it’s a great idea. At the time it was quite revolutionary.

Now the thing is that Sergei and Larry didn’t want to start a company. They wanted to finish their PHD’s at Stanford and have a nice and long career in academia. But they thought their idea was worth some money. So they tried to sell it for 1million$. For months they tried to convince people that PageRank was worth that amount of money. They spoke with almost all search engines, trying to sell it.

‘That’s horrible. Your search engine is much faster.’

They would put two laptops in front of managers running the search engines of the time, and ask them: ‘What do you want to search?’ And then they showed them the results on their own search engine and on the PageRank system. The most interesting response from one of the CEO’s was: ‘That’s horrible. Your search engine is much faster.’

He wasn’t even thinking about the quality of the search results. It was about the business model. If for instance Excite were to host a search engine that instantly gave people information they sought, users would leave the site instantly. The ad revenue came from people staying on the site. The term in those days was “stickiness”. So speedy, accurate results were a problem for his business model. At the time it took about thirty seconds for results to show up. In those thirty seconds you’d see advertisements. Slow search results meant more advertising revenue.

None of search engine companies were willing to buy PageRank. Larry and Sergey became frustrated and felt the future of the internet was not in very good hands. That’s when they decided they probably had to do it themselves.

To start their own business they needed 1million$

Around that time they were also told by Stanford University IT people they had to move their stuff from the university’s network. They were running their operations from university servers. The system frequently crashed because of the enormous amounts of traffic they attracted. The message was: ‘You’re basically crushing us here. You have to get out of here, because we have to do our work. We have to go back running our university.’

In order to start their own business with ample computer servers they needed around 1million$. So they went to Silicon Valley and talked to maybe more than a hundred people about funding. Everybody basically had the same response: ‘Why should we fund you? There are seven or eight mature search companies out here. Nobody needs a ninth, or a tenth search engine. It’s a horrible market. Don’t go there.’ 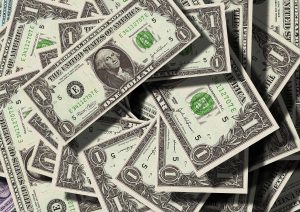 In the end they got their million together with small tickets from individuals. None of the famous venture capital firms stepped in at that point. Incredible if you think of it now; all these very smart people in Silicon Valley said NO to them and thought they were idiots to get into the search market. As one investor wrote (on the famous Bessemer Ventures Partners anti-portfolio page, where BVP lists their missed opportunities):

‘Cowan’s college friend rented her garage to Sergey and Larry for their first year. In 1999 and 2000 she tried to introduce Cowan to “these two really smart Stanford students writing a search engine”. Students? A new search engine? In the most important moment ever for Bessemer’s anti-portfolio, Cowan asked her, “How can I get out of this house without going anywhere near your garage?”’

For all those extremely smart people that turned down the opportunity to invest in Google it was probably their most expensive mistake. More juicy stuff like this: https://www.bvp.com/portfolio/anti-portfolio

Believe in your idea

All of this is why we – before we start the ritual of deciding who’s the best ClimateLaunchpad start-up this year – say: Don’t read too much into winning the ClimateLaunchpad prize. The winner is simply the person who, in the opinion of the jury, has the best idea. Now we always have great juries, with very accomplished judges. But they might very well be wrong. As history shows, even the smartest investors in Silicon Valley completely missed the opportunity to invest in Google early on. 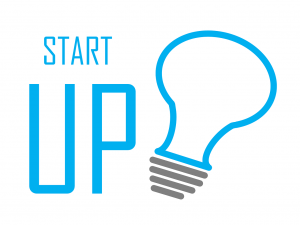 The one necessary and sufficient condition for a business is a paying customer, as one of the members of our Advisory Board, Bill Aulet, likes to say. That’s the real prize here: paying customers. 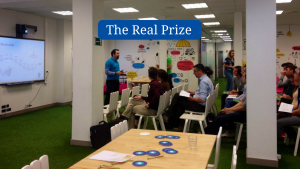 Of course winning ClimateLaunchpad is fun. But the biggest win is that we train you how to find a paying customer in the fastest way possible. Plus you get access to a huge global network of entrepreneurs, investors, corporates, trainers and coaches. All of that will help you find a paying customer much faster. And if it turns out there are no paying customers? No problem, because you didn’t waste years of your life trying to figure that out. Try again, and again. Until you get it right.

That’s how you start a business. Finding a paying customer is the real prize.

Delft IMP came in second during the 2015 Dutch National Final and finished in the Top-10 at the Grand Final. What they do? They figured out how to produce highly efficient catalysts, a technology that enables the transition from an oil­based economy to a bio­based economy. 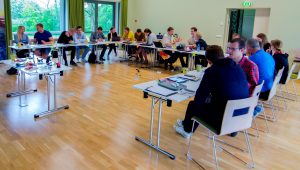 Actually… it’s not about winning.

Remember a few weeks ago we posted some tips on how to win ClimateLaunchpad? To tell you the truth, winning is overrated. The real win is so much bigger: learning to build a business and finding paying customers. That’s what we offer. And it all starts with an entrepreneur and a solid belief in his... Read more »