ClimateLaunchpad National Finalist Recyworks has begun a new stage in its journey to become a successful company.  They’ve merged with another like-minded startup located in the UK to form Urban Farmers. The team clinched the support of local government and found a prime location. The orders for their mushrooms are now flowing in and they have plans to scale big. How did they get here? We talked to them to find out what the startup journey has been like so far. 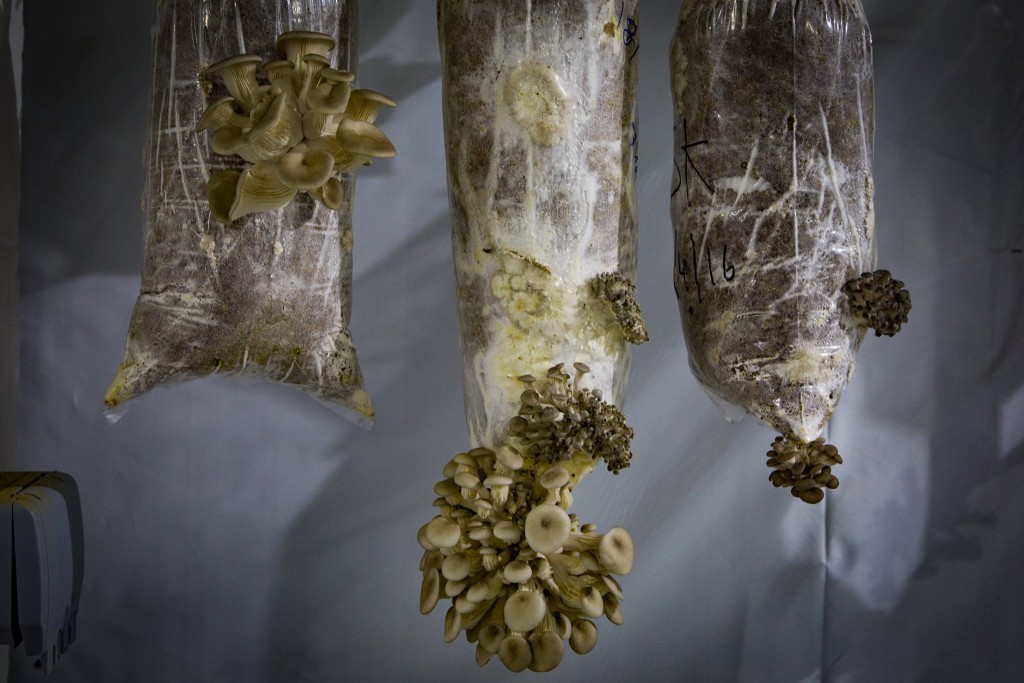 Marianna Ralli and Panagiotis Drakoulis had known each other since their schools days. Marianna had studied biology and Panagiotis marketing. After graduation they’d both pursued professional careers.

“One day Panagiotis called me to say he had an idea and would I meet him to talk about it. He shows up with a bag filled with coffee grounds that he used to grow mushrooms. To be honest, it was a bit weird looking, even a bit disgusting. But he was so excited. He had found a way to use a form of waste that was abundant in urban areas to grow a very nutritious food”

This was how the startup Recyworks was born. The startup uses coffee waste, treats it, and uses it to grow gourmet mushrooms.

The idea got them into a few competitions where they were awarded some money. “This let us know it wasn’t a rubbish idea,” Marianna stated, laughing at her word choice. “It gave us the push to keep going.”

It hasn’t been all rainbows and unicorns for the Recyworks team. Getting accepted into the ClimateLaunchpad competition was the beginning of “a terrible time.” Marianna explains:

“We realized we knew nothing. The other teams were so impressive.  We had no patents, no technology, no nothing. What we were doing seemed so small compared to the others. There was even a guy there who had invented a new engine, and his beachhead market was Rolls Royce. And here we were with mushrooms.

“This was when we realized that this does not look good for us.”

The team did not give up. Their misgivings about their business idea made them even more determined to learn as much as they could from the training and coaching sessions offered by ChrysalisLeap, ClimateLaunchpad’s partner in Cyprus and Greece.  Panagiotis explains:

“ChysalisLeap told us after the first day that they were only after serious teams. Even though we were having problems, we never gave up.”

“We knew we didn’t know anything. Every lesson we needed to learn came into question after that. We questioned every part of our business.  Through it all the guys at ChrysalisLeap helped us enormously while scaring the crap out of us at the same time.”

“We had a love/hate relationship with our coaches. Of course the Chrysalis people aren’t happy until you are crying on the floor,” Marianna added with a laugh. 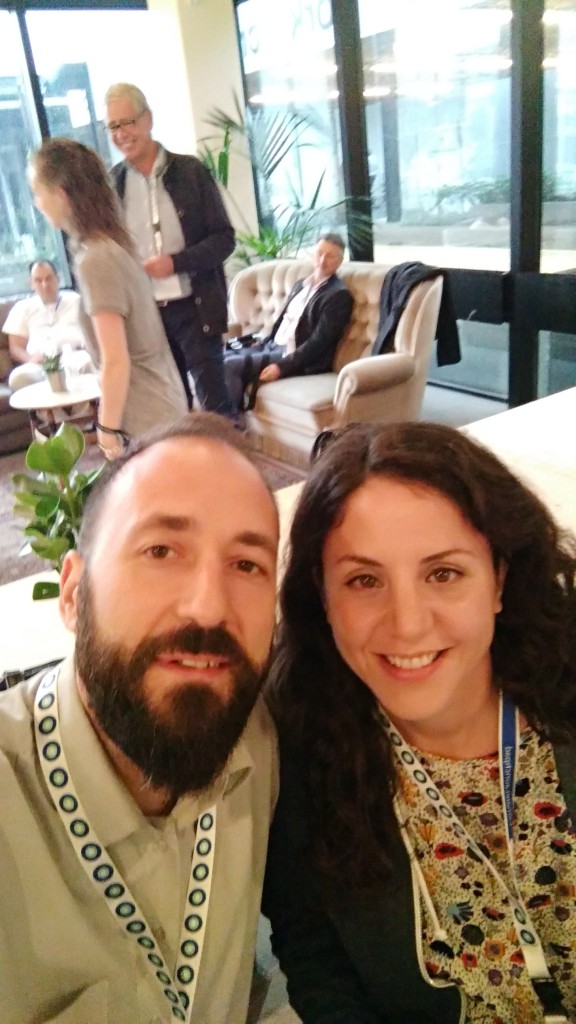 Panos and Marianna at the 2015 ClimateLaunchpad Finals in Amsterdam

When the time came for the National Finals, the last thing the Recyworks team imagined was being named as one of the final three to represent Greece at the EU Finals. When they heard their name called as a national finalist they were surprised and “ecstatic.” Marianna states,

“We were so excited. And a month later we were in beautiful Amsterdam. Meeting the other teams was great. We learned so much from them.”

The work the team had done to reexamine their business had paid off.

Meeting the other teams, networking with the judges, and the participants was a great experience for the Recyworks team. Even though they did not win the European Finals, they left energized and eager to continue.

The judges were impressed with the team and urged them to continue. “It was like a Nike commercial,” Panagiotis said. “Everyone was telling us, just do it.”

The team took the advice from the judges. They attended meetings for people interested in developing companies that used waste to produce energy and food. They networked.  They faced rejection.

“It was like we learned from ChrysalisLeap: focus, test, and pivot.”

No fairy tale for this startup

Panagiotis sweats the small stuff. He actually describes himself as “psychotic with details.” He learns from his mistakes and takes advice from others.

Getting the small startup off the ground has meant studying biology (remember, he’s the marketing guy), accepting lots of “tough love,” and making sure to find the right partners. For her part, Marianna has been learning what it takes to do marketing and communicate with customers.

“It hasn’t been like a fairy tale,” he tells us. “Our beachhead market isn’t Greece where we have our roots. It’s the UK. It’s hard to pick up and move there to start a farm.” While getting the business up and running, Panagiotis has uprooted himself from his home, leaving his wife and two daughters back in Greece. 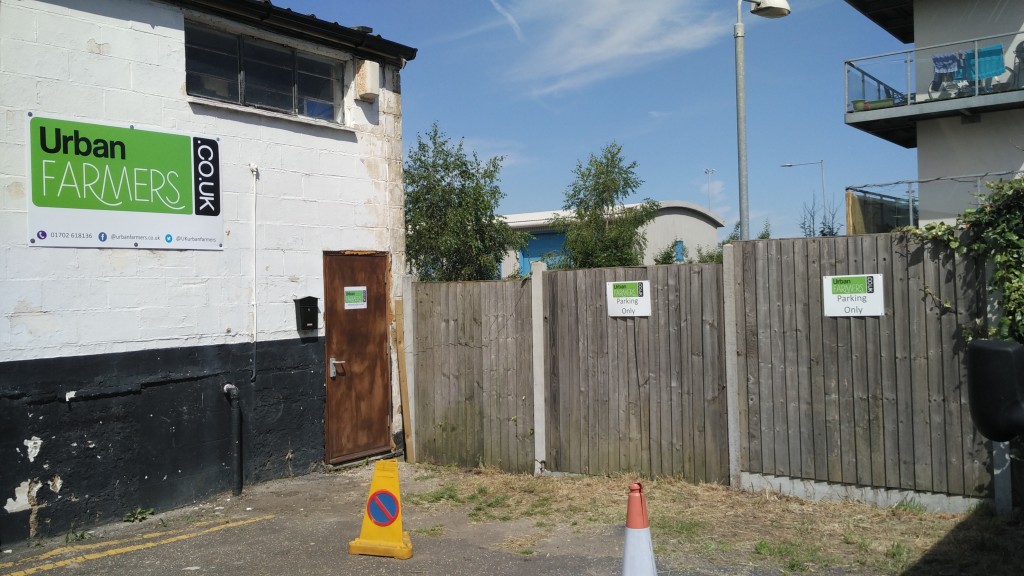 The startip Urban Farmers on location in Essex

Fortunately for Recyworks, Panagiotis made a number of promising connections by attending meetings and conferences. In Paris, he met a team from Essex in the United Kingdom that was working on something similar. After some face-to-face negotiations and a comparison of dreams and competencies, the two startup teams merged. Panagiotis tells us:

“After staying for 10 days with them we realized we had a lot of synergy together. Their team was made up of an engineer in renewables and an addiction rehabilitation consultant. They were passionate about reducing waste and water use. They also felt that the company could be a really nice way to accommodate vulnerable groups reentering the workforce. And then I was the marketing guy.

After ten days of face-to-face working together and talking together, we realized we should stick together.” 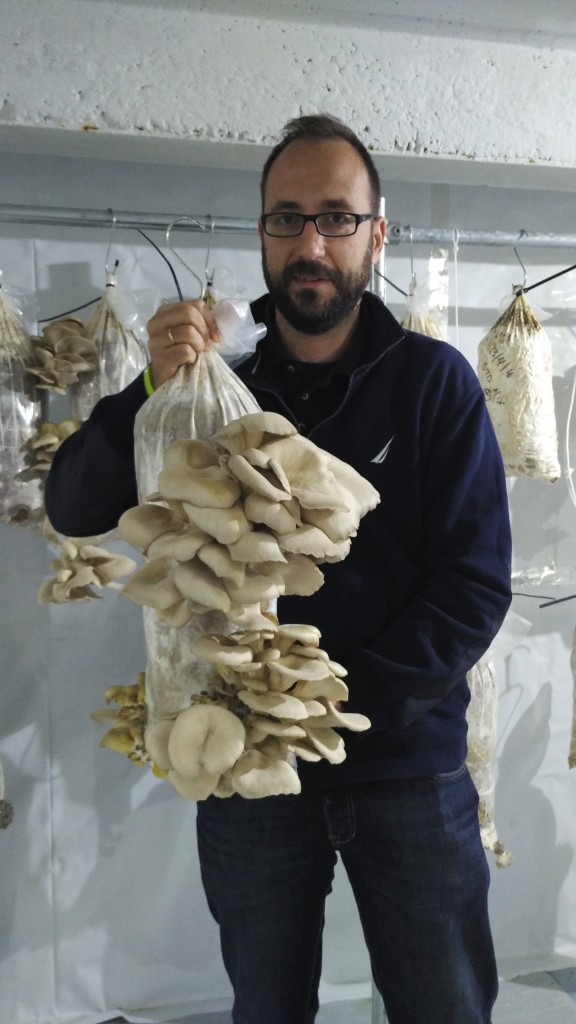 Panos with a bag of mushrooms

But even with this great match, the future of the team was far from secure.

Together they found their ideal client: local restaurants.

Urban Farmers tested their product with potential customers and had positive results.

They found the right price point.

They asked the right questions.

They had a gorgeous brochure and delicious recipes.

But still there were no orders for their gourmet locally grown mushrooms.

We had interested people. A good price point. Why didn’t they place an order?”

What the team learned was that restaurants don’t just wake up in the morning and change their menu. It takes 6-7 weeks. Just when Urban Farmers was ready to go back to the drawing board and pivot once again, the orders started coming in.

There were big sighs of relief all around. The idea behind Urban Farmers could work. It was working.

They’re not the only business growing mushrooms sustainably. But Panagiotis tells us they have an advantage over the others:

“We have something those companies don’t. We attended ClimateLaunchpad, so we learned that we want to grow. And we realized we wanted to create a business model in a small area with minimal logistics and minimal resources.

“We hope that in one year we’ll be ready to talk to investor sand make several micro farms. Because we are passionate, we also are bringing small local farmers on board. We try to empower them by getting them to cooperate with us.”

“Urban Farmers wants to be the next big thing in local farming. We don’t want to be hipster farmers or hobbyists. We want to expand and have a big impact on local food production and job creation.”

Panagiotis concludes the interview with a memory of the first days of ClimateLaunchpad:

“The first day when we got there, Paris [Thomas], who is the head coach told us he was going to teach us something called tough love. Because we Greeks are so complimentary and ‘Oh you are so good’ we were in for a bit of a challenge. We weren’t going to like it.

“They always told us change something and retest it. That’s hard. So you have a minimum viable product and you think you are ready to enter the market, but when you start talking to your customers you realize that you have made an assumption that is false. Then you go back to the drawing board. You change your business model and get back to your customers to validate your new assumption until you get it right.

“We were told, choose a direction and go for it. If that doesn’t work, try again. Focus-test-and-pivot, that’s what we do.”

Get your own copy of the ClimateLaunchpad workbook

ClimateLaunchpad has a great handbook for early stage startups. Subscribe to our newsletter to get your free digital copy. 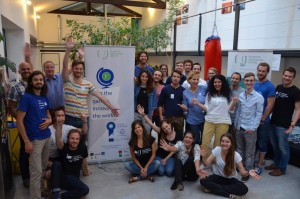 7 Questions to answer before turning your idea into a business

Do you wonder what it will really take to turn your great idea into a great business? Here are 7 questions to answer before getting started.

“We know you’re cheating,” the Desert Control team was told. The results seemed scientifically impossible. Ole Olesen told ClimateLaunchpad. “We had the same results as good American farm soil, in the Sinai. We ourselves didn’t even know what was causing such great results.”