When our founder Frans Nauta recently returned from leading our Boot Camp in Karachi, Pakistan, he reported: “It was quite something: great entrepreneurs, great atmosphere. And great participation by female founders. Over 50% of participants were women, and they totally rocked.”

We decided we needed to find out more about this. Participation by female founders is traditionally high and around 40% in our competition. But more than half is exceptional, even for us. So the question is, is this a coincidence or is there more to it? We got on the phone with Hira Wajahat from Stimulus, our National Lead in Pakistan.

First of all, can you tell us a bit about the energy sector in Pakistan?
“Pakistan’s energy sector is evolving. Traditionally it has been fossil fuel and oil based power generation. However, in recent years renewables are really catching on. At the moment there are almost 5,000 solar suppliers serving urban and rural locations. Most rural locations can be extremely remote and only accessible by traditional modes of transport such as camels, as road network does not exist. There is a large wind market as well with international companies investing in wind power through joint ventures with local companies. There is also a growing interest in bio fuels with several research projects going on in universities.

Pakistan’s current government has a massive focus on climate change. Our Ministry of Environment was renamed to Ministry of Climate Change (MoCC) in 2018 and it is currently driving three very interesting programmes. The first initiative is the Billion Tree Tsunami. The MoCC target  is to plant a billion trees in Pakistan by the year 2030. The second programme is related to electric vehicles, where they have set out a target of at least 50% reduction of CO2 emissions due to transportation. The third initiative is the Prime Minister’s Clean Green Pakistan Movement that we at Stimulus also signed off on. This movement intends to promote any action towards a greener Pakistan such as reducing pollution, taking action to stop using plastics, and encouraging transition towards renewable energy. So, yeah, the energy sector is definitely transitioning.”

Who are the main players in this, besides the government?
“For the most part it is the private sector. The local industry is quite active with major investments coming from Germany, Turkey and the Netherlands in addition to China. Partnerships are the key to success and large solar and wind projects are being implemented.”

What would you say is the role for start-ups in the energy transition?
“Our population is around 200 million people and large players have an important role in supporting the shortfall of electricity by putting up mega-projects that feed into the grid. But for a country like Pakistan, where almost 50% of its population is still off the grid, many rural communities still don’t have access to the main energy grids or other basic public infrastructure. Here the role of start-ups is really critical in terms of giving all people access to utilities like energy, water, sanitation and health care.

Recently, the number of start-ups has showed a massive increase. The previous government gave a big push to the start-up ecosystem. They invested a lot of money in youth and entrepreneurship and set up 5 national incubation centres across Pakistan. This is where people experiment with ideas, think about products and services, sit down to connect with mentors. And they open up the opportunity to get loans from the bank and investments from venture capitalists. Once the government did all that, private venture capitalists and angel investors came on board.

Nowadays a lot of third or fourth generation Pakistanis from business families are coming back from the US or Europe, where they completed their studies. After being abroad for 10-12 years, they bring all their expertise and knowledge back to Pakistan, often in start-ups. There’s a massive opportunity here, because we’re an underdeveloped market.”

Can you explain the amount of female founders in the Boot Camp. How did you achieve that?
“With Stimulus we focus on developing the clean-tech ecosystem in Pakistan. ClimateLaunchpad helps us achieve that mission. It also helps that both the CEO of Stimulus, Mehreen Shoaib, and myself as Pakistan’s National Lead are women.

Our aim was to reach out to every single university in Pakistan and work with them. We reached out to a total of 195  universities through personal contact with phone calls, letters, presentations and online webinars.

Pakistan is an academically driven country, and a lot of our university enrolment is based on marks or rankings in our high school, up to 12th standard. Generally women score better and that is why there are more women in universities than there are men. A lot of the teachers also are female, and we reached out to them as well.”

So you reached out to universities, where there tend to be more women than men?
“Yes. But to be honest, if ClimateLaunchpad had been initiated 10 years ago in Pakistan we probably would not have seen so many female founders participating. Even 5 years ago men would likely have outnumbered women. But now, there is a lot more awareness and more people want to participate. So yes, women are there. Women have always been there, they just didn’t have access to an organized platform that allowed them to come out with their ideas and present them in such an organized manner.”

What does ClimateLaunchpad bring to the cleantech ecosystem in Pakistan?
“Based on our interaction with a lot of people in the start-up ecosystem in Pakistan, we found that there are either competitions or trainings – or capacity building programs. There has never really been a program that merges these things, in terms of selecting start-up teams that you train before having them compete. That is a good mix that helps to build successful companies. And that is what we need to create real change and real impact.”

What specific challenges do you see for the Pakistani cleantech sector?
“I think the biggest challenge is that when Pakistani’s see the word ‘tech’, they think about a ‘mobile app’ or an ‘internet based platform’. A lot of the effort we’ve been putting in has been to make people understand that tech means technology. It could be a product, it could be a generator, it could be an engine. That’s one challenge where a lot of education and creating awareness is key. Again, we’re a huge population, we need to reach out to the masses and explain things.

The second thing would be is that we are still developing specific guidelines and goals for us to reach with regards to cleantech and climate change. A lot of Pakistani are not educated. So when people say no pollution, it’s automatically like ‘if you stop using plastic bags, it reduces pollution.’ But of course, there are many more aspects to that. We need to get people to understand that.

So yes, cleantech has its challenges, but more people are getting into the clean-tech industry, more people are coming back to Pakistan from abroad and give more insight on the entire industry. Also, our local industry is gearing up to resolve climate change challenges – as is evident by ready participation of some of our sponsors and endorsers for the programme such as Ministry of Climate Change Pakistan, Lucky Cement, Shell Tameer, Dalda, Engro, Cargill Pakistan and City FM89. It is actually all starting to make sense to people now.”

2017 Finalist Iron Roots is definitely on a roll. What they do? They found a way to run all plastics out of sports apparel. In 2018 they opened up their own online store and their products are also for sale in several (physical) stores. 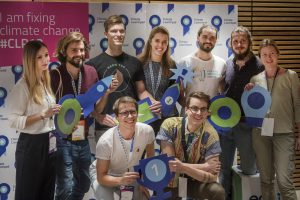 Frans On Green Business. Plus: Secure Your Tickets For Our 2019 Global Grand Final In Amsterdam

Hey all, Our motto is that we fix climate change, one start-up at a time. We may have to adjust that as we keep smashing our own targets. This year we wanted to supersede our 2018 record with 500 applications and hit the magic 2,500. Well, last week we nailed it. And we are still... Read more »