By Catherine Early.
(This article originally featured in our event magazine the CLP Daily #3)

Start-ups should measure the impact of a product in the early stages to test assumptions and evolve their thinking.

Product design, marketing, business plans, investment potential…there are many things occupying an entrepreneurs’ thoughts in the early days. Measuring their start-up’s impact on climate change is not necessarily one of them, but there are clear benefits for those who make the effort.

Firstly, going through the process of forecasting the true climate impact of what they are proposing is a really valuable exercise for an entrepreneur because it helps them really hone in on their early proposition, and whether their product is really going to have a positive impact, says Chris Roe, ClimateLaunchpad’s national lead in Germany.

“Thinking through this element really early on is important because it can help shape the business further down the line,” he says.

While these calculations will inevitably just be forecasts while the business is at such an early stage, it could be invaluable for entrepreneurs to work out their thinking around their climate impact, and integrate it into the business model, he adds.

It also provides a start-up with an opportunity to benchmark its impact against business-asusual and competitors, he says. This could be vital information to attract investors, who can use the forecasts for due diligence – a key part of the investment decision-making process, Roe says. It allows them to analyse the assumptions behind the business, and validate those themselves, he adds.

Finally, coming up with early forecasts requires a start-up to establish the key elements that it will track over time. “By going through this exercise now, you can follow the progress of your company through its journey using metrics and parameters that you set up front,” Roe explains.

“Clearly you need your launch to be successful for that to matter, but the ability to have thought this through and see how true you’re staying to your climate credentials as your business grows is really important,” he says.

Measurement methodology
EIT Climate-KIC has developed its own climate tool, which is accessible to entrepreneurs and start-ups on its Accelerator programme. The Climate Impact Forecast (CIF) is a “key differentiator from other early-stage business competitions”, Roe believes.

The CIF breaks impact forecasting down into easy to answer questions, such as how a product is transported, and the result is a green flag for positive climate impact, and the equivalent number of trees or people for the carbon footprint your idea could reduce.

“A cotton or paper bag might not be less impactful than plastic.”

Bram van der Grinten, who developed the CIF, explains that the tool teaches users to think about impact in terms of data, rather than trusting in their own assumptions. “When something sounds green, we’re interested in doing it. But we show them examples where that isn’t true, for example, a cotton or paper bag might not be less impactful than plastic.

“When they use this data, they might discover that they are not impactful, or not in the way they thought. Or they get confirmation that they are, in which case they also learn about what they should prioritise to make further impact,” he says.

It can be motivational and provide guidance, and also increases the potential for innovation to reduce greenhouse gases, he says.

Van der Grinten wants to keep developing the tool so that it can aggregate impacts across several products or solutions that a start-up might have in its portfolio as it transitions into a larger company. “Stay curious,” Van der Grinten advises startups. Innovators should continue to use the CIF as new data becomes available, to see if it changes the overall impact of a product, he says. “Build, measure and learn your start-up, and take impact metrics into account for every cycle.”

Walking the talk
EIT Climate-KIC has also begun to measure the climate impact of the ClimateLaunchpad competition. Up till now, it has focused its impact calculations in terms of economic and social criteria such as the level of investment raised by the start-ups it has supported, the number of jobs created over a three-year period, and the number of start-ups that are still in business.

This year, it has added to that by commissioning a consultant to identify the value of the ClimateLaunchpad competition. It looks at carbon emissions reduction, but also adaptation metrics such as water savings.

“They might discover that they are not impactful, or not in the way they thought.”

It also wants to quantify the value generated by mobilising a broad set of partners in countries that can adapt the ClimateLaunchpad curriculum and methodology to their own circumstances. These networks of green entrepreneurs, now in over 50 countries, are providing entrepreneurs with the support they need to launch businesses.

“There’s a lot of value that we’re creating from training and coaching and participation in the journey from the moment they enroll, to when they’re pitching at the final.

This training can help participants develop their careers in the future, even if the idea they are working on at the time does not work out in the long run, Roe points out. “We want to track all the potential of all these entrepreneurs launching themselves into the world with the intention of doing something positive around climate,” he says.

It takes 816 fish to put one salmon on your plate Synthesea is putting a stop to that with their sustainable alternative to fish oil Fish need omega-3 to grow rapidly and be nutritious. For farmed fish the source of omega-3 comes from wild-caught fish oil, which is made by squeezing fish caught from the... Read more » 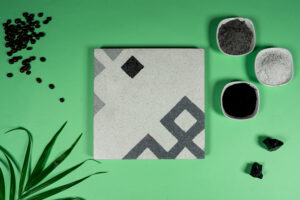 ‘Made with carbon emissions’ Carbon Craft Design creates tiles by upcycling carbon emissions They won third place during our 2020 Global Grand Final. Mumbai based start-up Carbon Craft Design works on upcycling solutions for architects, businesses and consumers. They launched the Carbon Tile this year, as their first product where design meets sustainability. With every... Read more »